Well, maybe not undercover, but there are aspects of Concordia you might not hear about on a visit. Most of these pertain to the quirks of the community here at Concordia University Nebraska which have been formed and maintained over the last 127 years. Quirks that you could experience too. Here are a few of the most well-known and well loved.

Sitting in the middle of the square is a large brass statue. It depicts a man reaching out with pillars supporting him and a geometric cross that outlines his body. It’s a staple here at Concordia University Nebraska. You’ll often find students playing frisbee or doing homework around it during sunny days, but it’s specifically during the winter months that this statue is marked as special. To celebrate the first snowfall, students participate in The Naked Man Run. Anyone who wants to join meets in one of the lounges at Concordia a few minutes before midnight. Once the clock hits twelve, all of the students run out to the Man Be Free statue, circle it twice and then perform three snow angels in the freshly fallen snow. Once completed, everyone runs back to the warmth of the lounge. However, there’s a catch. No warm clothes are allowed. This includes winter coats or shoes. It’s a super fun tradition that only students know about, and now you…

Back when Dunklau was being built, Concordia was putting in a large circular block of concrete in the square not too far from the Man Be Free statue. Students were unsure of what it was going to be and people made many speculations. Eventually, it was determined that the administration at CUNE was building a hot tub! Everyone was excited. However, just a few weeks later, when the project was finished, it was found to be a flower bed. We were outraged. In protest, students still refer to the flower bed as the Hot Tub to this day.

It’s no secret that Concordia has amazing musical talent. This is evident through the many student recitals, choirs, bands, and composers that come from our student body. At the end of the year, in celebration of the talent at CUNE, we have The Un Recital. It’s a student led recital where anyone can participate, and the goal is to be funny. The Un Recital itself is a recital meant to make others laugh through parodies, jokes, and bad music playing. Additionally, it allows the students to take a break from their busy schedules and rigorous training to sit back and have fun.

Another fun quirk at Concordia is the nicknames. Almost every academic building has one nickname or another that has been lovingly given to them by the students. You have to be a part of the community to know the name…

Concordia’s dorm buildings have an array of biblical names that make them all unique. One of which is Ruth. Ruth itself is sectioned off into three buildings, Ruth A, B, and C. They’re all connected through a hall but easily stand on their own. In 2020, two students decided that A, B, and C needed distinct names to match their distinct qualities. They went to the board and petitioned for these dorms to be titled Ruth, Boaz, and Obed. A petition was sent around campus and stickers were made. Eventually, the board passed the petition, and now Ruth A, B, and C will forever be called Ruth, Boaz, and Obed as requested by the student body.

Each spring the students at CUNE gather for Spring Weekend. It’s a week of games, prizes, and laughs. Students are able to make teams and participate in a variety of activities for Spring Weekend. We end the week with a large showcase. Teams are given a theme and asked to maintain a storyline throughout the week as they participate in each event. The whole week is super fun!

So there you have it! Six quirky and fun traditions and practices that the students of Concordia University Nebraska are a part of. You could be too! 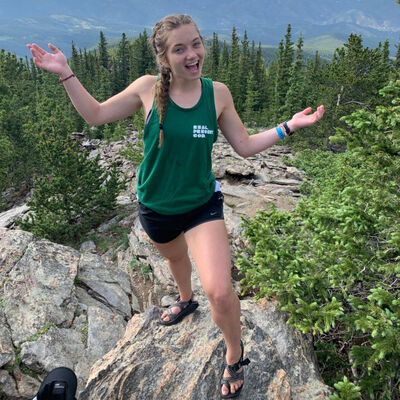 I’m a junior majoring in Secondary Education and English Language Arts. I’m originally from Minnesota, but I hate the cold. Some things I enjoy are literary theory, anonymous poetry and being outdoors. You can catch me hiking, running or reading a book. I hope you all enjoy the blogs!

Navigating the Life of a Student Athlete

Discovering and Creating Your Major