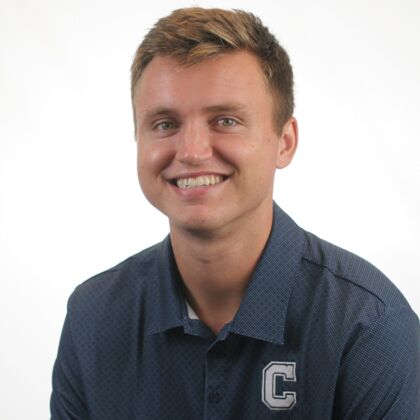 Cam Long was announced as Concordia University Head Tennis Coach in the summer of 2021. Immediately prior to taking the reins of the Bulldog Tennis programs, Long served as the assistant coach at NCAA Division III Centre College in Dansville, Ky.

In his assistant role assisting the men’s and women’s teams at Centre from January 2021 until August 2021, Long served as recruiting coordinator. He helped guide the Colonels men’s and women’s squads to appearances in Southern Athletic Association championship matches. The women’s team finished ranked 36th nationally while the men’s team ranked as high as 13th in the Atlantic South Region (both high watermarks for those respective programs). Long coached eight all-conference performers at Centre.

Long’s coaching experience also includes a run at the high school level. He assisted the boys’ tennis program at Liberty High School (Iowa) during the spring of 2020 and has served as a youth instructor in his former college town of Decorah, Iowa, and his hometown of Dubuque, Iowa.

As a collegiate athlete, Long lettered four times at Luther College, a member of the America Rivers Conference. He also served on Luther’s Student-Athlete Advisory Committee and participated in the NCAA Career In Sports Forum in 2018. Long has grown up immersed in college athletics. His father Curt Long is the Director of Athletics at Clarke University in Dubuque.

Cam graduated from Luther with a B.A. in Data Science. He owns an M.A. in Sport & Recreation Management from the University of Iowa.