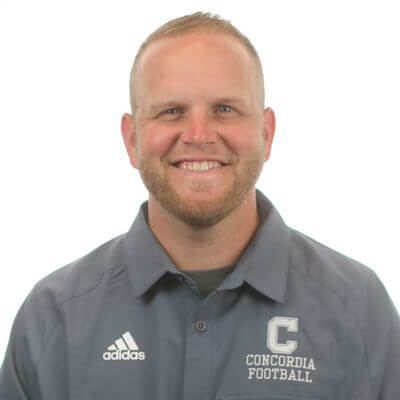 The 2021 season marked Patrick Daberkow's 15th on the Concordia Football staff and fifth as head coach. He spent three seasons as the secondary coach and then seven years as defensive coordinator for the Bulldogs. Daberkow was officially promoted to the role of Head Football Coach in December of 2016.

In terms of record, the 2021 campaign was Daberkow's best yet. He guided the Bulldogs to a 7-3 overall record (tied for third in the GPAC) and the program's first sweep of in-state rivals Doane, Hastings and Midland since the 1970 season. The first season of Daberkow's head coaching tenure (2017) was highlighted by a homecoming victory over then seventh-ranked Doane and a late four-game win streak. The Bulldogs made one appearance in the national poll and finished 6-4 overall. Their third-place league finish was the program's best since 2002. The 2020 team began the season at 4-0 before finishing 4-4 with the help of All-American linebacker Lane Napier. The program has produced at least one All-American in seven-straight seasons and in nine of the past 10 seasons. Prior to Napier (2018-21) and Garrett Schardt (2021), Tarence Roby (2017) and Trey Barnes (2015, 2016) were also named NAIA All-Americans by the American Football Coaches Association.

Between 2013 and 2015, Daberkow coordinated two defenses that finished in the top five of the nation in terms of yards allowed per game. Led by GPAC Defensive Player of the Year and All-American safety Darnell Woods, the 2013 Bulldogs ranked No. 1 in the NAIA in pass defense (134.7), No. 5 in total defense (285.5) and No. 5 in scoring defense (17.3). Then in 2015, Concordia put together another dominant defense behind second team All-American Trey Barnes. Among all NAIA teams, Concordia ranked third in pass defense (144.0), fourth in total defense (279.6), fifth in pass efficiency defense (96.7) and 13th in scoring defense (18.7). The 2016 unit wasn't far off, finishing 17th in total defense (328.4). Led by Napier, the defense was the key to a six-game win streak that closed out the 2021 season. Napier finished his career with a school record 535 tackles and was named the '21 GPAC Defensive Player of the Year.

In Daberkow's seven years as defensive coordinator, Concordia produced a total of 29 first or second team All-GPAC defensive selections. Woods became the school's first ever GPAC Defensive Player of the Year. Prior to 2013, Daberkow also served as defensive backs coach. The 2010 team ranked 12th in the NAIA in pass defense.

Daberkow is a native of Madison, Neb. He resides in Seward with his wife, Emly, their two daughters, Kinley and Brynn, and son, Roman. 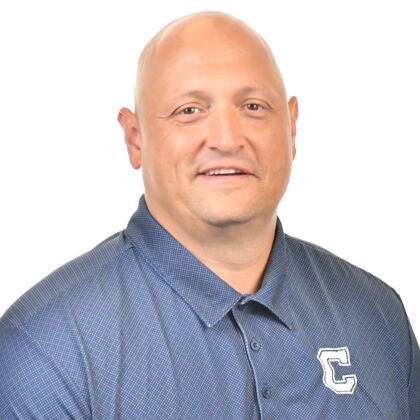 Corby Osten finished his 14th season as an assistant coach with the Concordia University football program in 2021. Following the 2016 campaign, Osten received a promotion to the position of defensive coordinator on Head Coach Patrick Daberkow's staff. A native of Columbus, Neb., Osten continues to also coach the defensive line.

Osten's first year as defensive coordinator yielded three first team All-GPAC selections in defensive backs D'Mauria Martin and Tarence Roby and linebacker Lane Napier. The defense ranked in the top 20 nationally in scoring and pass efficiency. Then in 2018, Napier led all NAIA players with 142 tackles and was again named a first team all-conference selection. Napier is also a four-time AFCA All-American (first team in 2021 and second team in 2020) and a 2018 first team All-America selection by the Associated Press. Prior to Napier (2018-20), Tarence Roby (2017) and Trey Barnes (2015, 2016) were also named NAIA All-Americans by the AFCA. Napier closed his career with 535 career tackles and was named the 2021 GPAC Defensive Player of the Year. The defense played a key role in Concordia's six-game win streak to conclude the 2021 season.

Osten previously led a Concordia special teams unit that ranked among the nation's best in 2012. The Bulldogs' Derek Blessing led the NAIA with 388 punt return yards and three punt return touchdowns and kicker Kenny Zoeller racked up the second most field goals nationally with 15. As a team, Concordia ranked fourth in the NAIA in average yards per punt return (16.6) and 11th in average yards per kick return (22.9). Adam Meirose replaced Zoeller in 2013 and twice earned all-conference accolades, giving Concordia a first or second team all-league kicker for three-straight seasons.

As a player, Osten was a three-year letter winner on the Bulldog Football team. Osten helped the Bulldogs to the 2001 GPAC Championship. Concordia advanced to the quarterfinals of the playoffs during the 2001 campaign.

Osten attended Concordia University from 1999-2003. He received his bachelor’s degree in Secondary Education with endorsements in Theology and Physical Education. Corby resides in Seward with his wife Amanda, daughter Isla and sons Tyce and Jaxx. 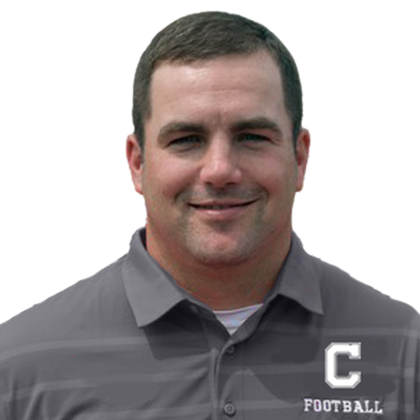 Concordia alum Trent Laune will begin his first season as a full-time member of the Concordia University Football staff in 2022. He returned to Seward after most recently serving as the Defensive Coordinator at NCAA Division III Grove City College in Grove City, Penn.

Originally from Ashland, Neb., Laune played linebacker for the Bulldogs from 2004 through 2007 and was named Second Team All-GPAC in 2007. He immediately began his coaching career following his graduation and served as a graduate assistant for the Bulldogs under former head coach Vance Winter. After leaving Seward, Laune landed at NCAA Division III Greenville University in Greenville, Ill., as Defensive Coordinator. Between Greenville and Grove City, Laune possesses a combined nine years of experience running defenses at the collegiate level.

While at Grove City, Laune collaborated on the program’s turnaround and helped the Wolverines produce a combined record of 25-8 over the 2018 through 2021 seasons. Under Laune’s direction, Grove City’s 2021 defense limited the opposition to averages of 254.0 yards and 15.8 points per game. While at Greenville, Laune enjoyed similar success in elevating the defense and aiding the Panthers in a 9-2 campaign in 2013. Laune and the Greenville program produced an NFL free agent signee in Nicholas Morrow, a current member of the Las Vegas Raiders. As part of his duties, Laune proved successful on the recruiting trail in landing student-athletes from 11 different states throughout his career.

Laune will be returning to his roots. He led the 2007 Bulldogs in tackles with 70 while also recording 3.5 tackles for loss and two interceptions. As a graduate assistant at Concordia, Laune coached standouts such as linebacker Jerrod Fleming, a 2011 First Team All-GPAC performer. Laune earned both his Bachelor of Arts in Business Administration and his Master of Business Administration from Concordia. 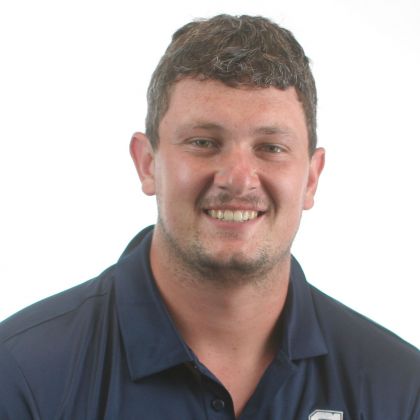 Koch previously served Concordia as a graduate assistant coach with a special focus on coaching the offensive line. The 2021-22 academic year represented Koch’s third season on the coaching staff. The native of Doniphan, Neb., graduated from Concordia in 2019 with degrees in Elementary Education and Special Education. He went on to earn his M.S. in Athletic Administration.

Throughout his collegiate career, Koch started on the offensive line as a guard and tackle. He was named Honorable Mention All-GPAC and Honorable Mention Omaha World-Herald All-Nebraska as both a junior and senior. During Koch’s junior season, he helped pave the way for running back Ryan Durdon to pile up 1,247 rushing yards. The Bulldogs finished the 2017 season at 6-4 overall.

The Doniphan, Neb., native is the son of Bill and Michelle Koch. His sister Madison is currently a member of the Bulldog Dance team. 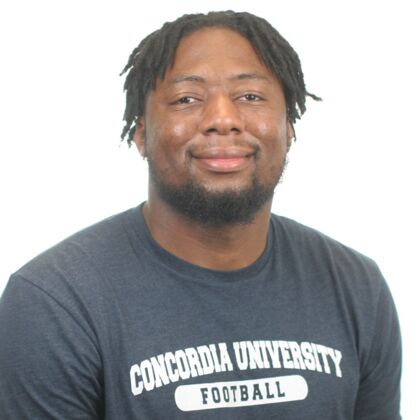 A native of Atlanta, Ga., Combs played defensive back at NCAA Division III Lakeland University in Plymouth, Wis., where he earned Second Team All-Northern Athletics Collegiate Conference honors. Combs immediately transitioned into coaching after completing his time as a student-athlete for the Muskies during the fall of 2021. Combs started the final 33 games of his collegiate career at Lakeland.

Combs graduated from Lakeland with a bachelor's degree in Sports Management and Leadership. He is pursuing his master's in Coaching and Athletic Administration from Concordia. Ezekiel grew up as the only male in a house that included his grandma Sharon, mother Xzavia and four sisters: Sacoya, Tanja, Kiyana and Angelina. 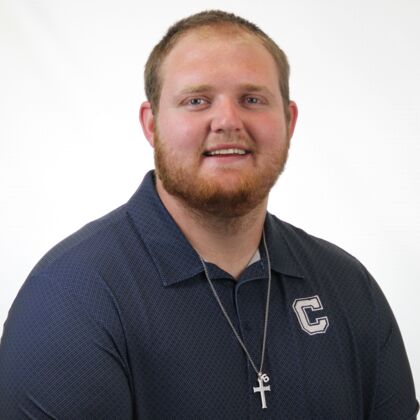 Following his collegiate career at a rival GPAC school, Bryce Simnacher has transitioned into a coaching role on the Concordia University Football staff. Simnacher assists Grady Koch with coaching the offensive line.

Simnacher played his college football at Dordt University and was a member of the 2020 Defender team that qualified for the NAIA playoffs. A native of Hereford, Texas, Simnacher graduated from Dordt with his Bachelor of Art degree in K-12 Physical Education & Health. Simnacher enjoys being active within the community and has coached youth league flag football and was named a 2018 Fellowship of Christian Athletes Athlete of the Year.

Simnacher is currently pursuing his master’s in athletic administration and Coaching from Concordia. Bryce is the son of Keith and Laura Simnacher and has a sister named Hailey. 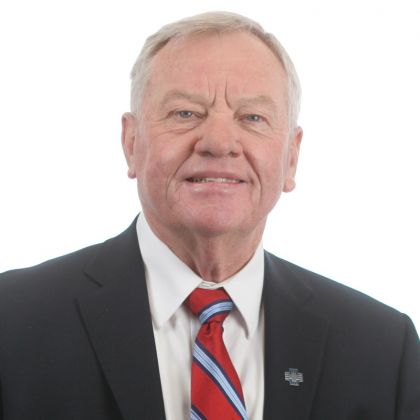 Courtney Meyer continues to serve Concordia football as an assistant coach following a 19-year run as Bulldog Head Coach from 1990 to 2008. Meyer retired his position as head coach with a record of 70-115-1, making him the program's all-time winningest coach in terms of number of victories.

Meyer's best season at the helm of Bulldog football came in 2001 when Concordia set a school record for wins with a 10-2 campaign that included a GPAC co-championship and berth in the NAIA Football Championship Series. The Bulldogs defeated St. Ambrose (Iowa) 31-26 in the first round before falling, 34-10, in the quarterfinals at the hands of Sioux Falls.

In his current role coaching kickers and punters, Meyer helped 2013 graduate Kenny Zoeller develop into an All-American in 2012. Zoeller made 15 of 20 field goal attempts and 27 of 28 extra point tries in 2012. Zoeller's replacement, Adam Meirose, received second team all-conference laurels in 2013 and first team accolades as a junior in 2014. 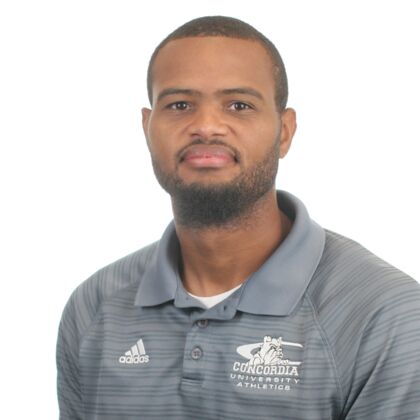 Von Thomas finished his fifth season as an assistant football coach in 2021. Thomas returned to his alma mater as Multicultural Program Specialist and Assistant Director of Student Life. He coaches running backs on Patrick Daberkow's staff.

Thomas enjoyed a record-setting career on the gridiron. The Miami, Fla., native piled up program career records of 7,260 total yards of offense and 65 total touchdowns while starting at quarterback in each of his final three seasons. He also left Concordia with school single-season records for touchdown passes (21), total offense (2,508), completions (197), passing attempts (334) and completion percentage (59.0). He owns additional career program standards for passing touchdowns (49), completions (510), pass attempts and rushing yards by a quarterback (1,598).

Von and his wife Daisha live in Seward with their daughter Sophia and son Von III. Daisha serves Concordia as a first year coordinator in academic student services. 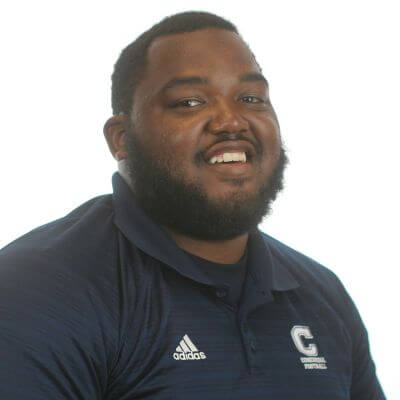 A native of Houston, Texas, Jackson earned second team All-GPAC accolades in 2016 after being named honorable mention all-conference in 2015. Also an Omaha World-Herald All-Nebraska choice in 2016, Jackson recorded 105 tackles, including 6.5 for loss, during his four years as a nose guard at Concordia. Jackson helped the 2016 squad to a 7-3 overall record and No. 19 ranking in the final national poll.

Jackson graduated from Concordia with his degree in Business Administration. He is the son of Ronald Jackson Sr. and Danelle Sampia. 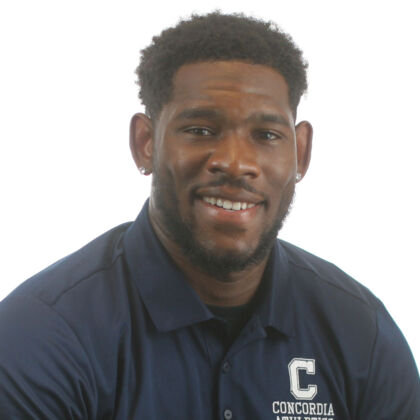 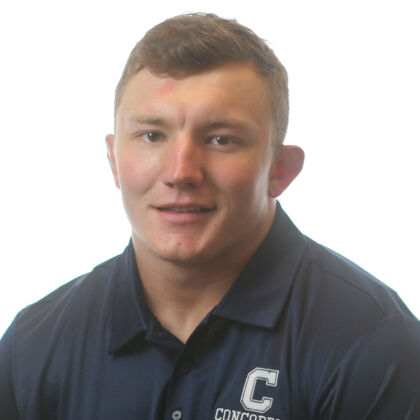 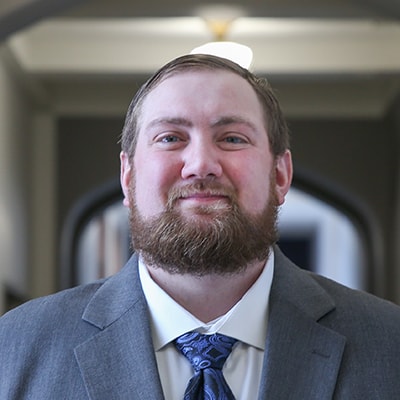 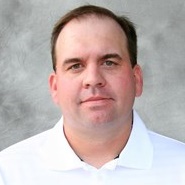