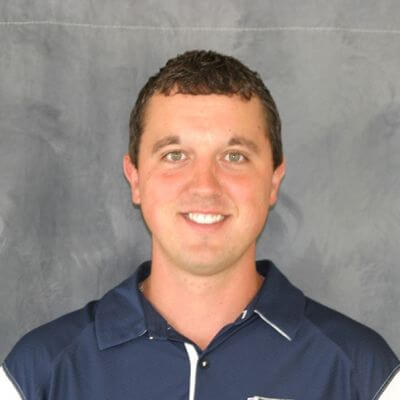 Dupic has lifted the Bulldogs to tremendous heights, leading the program to its winningest eight-year stretch in program history (242-145-1). The 2021 season continued the upward trajectory of the program as the Bulldogs advanced to the NAIA World Series for the first time ever. Not only that, Concordia broke school single-season records for wins (42), home runs (90), runs scored (468), hits (599) and pitcher strikeouts (529). As part of the greatest season in program history, Dupic's squad won the Bellevue Bracket of the NAIA National Championship Opening Round and swept GPAC regular season and postseason championships. The Bulldogs defeated Doane in the GPAC postseason title game for the program's first-ever GPAC tournament championship. Jake Fosgett became the second pitcher under Dupic to be named the GPAC Pitcher of the Year. Following the season, Dupic was named an NAIA Regional Coach of the Year by the ABCA and the Midlands Men's Coach of the Year by the Omaha World-Herald.

In 2022, Concordia came within one win of a return trip to the NAIA World Series thanks to a postseason run that featured nine-straight elimination game victories. The '22 repeated as GPAC tournament champs, won 40 games and reset the program records for home runs (113) and runs scored (516) in a season. At the time, the 2017 team rose to greater heights than any Bulldog baseball team had before, winning the GPAC regular-season title, advancing to the national tournament and claiming victory in a national tournament game. None of those feats had ever before been attained in school history. The 2019 team, led by GPAC Player of the Year Christian Meza, achieved similar results by winning another GPAC regular-season title, reaching the NAIA opening round and winning once during national tournament play.

Prior to Dupic's arrival in Seward, the program had not produced a winning season since 1979. Concordia's most recent conference baseball title had come in 1986. Under Dupic, the Bulldogs reset the school single-season wins standard three years in a row (2015 through 2017 and again in 2021). The 34-win 2017 squad not only broke the program wins record, it set a new standard for pitcher strikeouts (broken again in 2018, 2019 and 2021).

The 2017 and 2019 GPAC Coach of the Year, Dupic has built the premier pitching staff in the conference. After ranking third among GPAC squads in team ERA in both 2017 and 2018, the '19 team led the conference in ERA and shattered the school single-season strikeout record by piling up 501 K's. Four of the five first team All-GPAC pitching spots went to Bulldogs. In 2018, Nick Little (winningest pitcher in program history) turned in perhaps the greatest season ever by a Bulldog pitcher and was named the GPAC Pitcher of the Year. Little went 9-2 with a 2.36 ERA and 90 strikeouts in 91.1 innings. Then in 2020 (a season cut short), lefty Jason Munsch struck out 59 hitters in 26 innings without allowing an earned run. In June of 2020, Munsch signed a MLB rookie contract with the Milwaukee Brewers. During Dupic's tenure, three Bulldogs have been recognized as NAIA Honorable Mention All-Americans: Little (2018), Jake Fosgett (2021) and Jayden Adams (2022). Christian Meza was named the 2019 GPAC Player of the Year.

A native of Emmetsburg, Iowa, Dupic served as an assistant coach at his alma mater from 2007 to 2014. In his seven seasons working with Buena Vista head coach Steve Eddie, the Beavers put together a combined record of 194-109 with IIAC regular-season and tournament titles in both 2010 and 2014. They made NCAA Division III national tournament appearances in 2010, 2011 and 2014, including a 2011 World Series berth. The success was unprecedented for a Buena Vista program that experienced 24 losing seasons in 26 years prior to 2008.

As pitching coach, Dupic worked wonders with the Beaver hurlers, who led the IIAC in ERA and strikeouts over his final six years at BV (2008-14). In 2014 they set a school record for strikeouts in a season during a 37-9 campaign. Over his last six years at BVU, Dupic mentored 13 all-conference pitchers and 21 academic all-conference pitchers. He also aided in the growth of 2014 Major League Baseball draft pick Scott Harris.

Owner of a bachelor’s degree in elementary education (2008) and a master’s in science in education (2011) from Buena Vista, Dupic was a two-sport star for the Beavers. Dupic, who served as team captain, earned first team all-conference accolades in 2006 and 2007, first team all-region in 2007 and team MVP (2007) honors on the diamond. On the basketball court, Dupic received team MVP laurels in 2007.

Dupic began his collegiate career at the University of Iowa (2002-05), where he was a member of the Hawkeye baseball team. He received Academic All-Big Ten recognition for the 2003-04 and 2004-05 seasons.

Following his collegiate playing days, Dupic signed a professional contract with the Sioux City (Iowa) Explorers, a member of the American Association of Independent Professional Baseball.

Ryan and his wife Abby reside in Seward with their sons Cole and Cody. 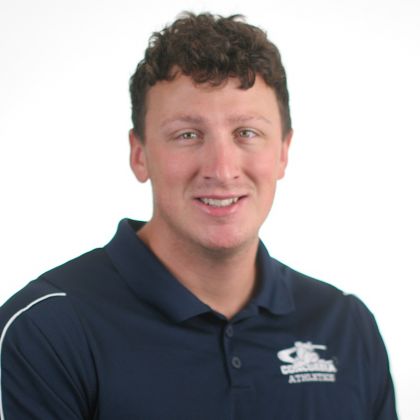 Caleb Lang completed his second season as a member of the Concordia University Baseball staff in 2021-22. As Assistant Baseball Coach, Lang has a primary focus on working with Bulldog hitters.

Lang's first season at Concordia saw the program break a school record for wins in a season (42) while reaching the NAIA World Series for the first time ever. Offensively, the Bulldogs broke single season school records for home runs (90), runs scored (468) and hits (599). Four Concordia position players were named first team all-conference: Jayden Adams, Keaton Candor, Beau Dorman and Joey Grabanski. The 90 home runs shattered the previous school record of 40 homers in a season by the 2016 team. The offense elevated to an even higher level in 2022 as the Bulldogs repeated as GPAC tournament champions and came within one win of a return trip to the World Series.  The '22 squad belted 113 home runs and tallied 516 runs while again setting new school standards. Jaidan Quinn became the program's new single-season home run king (19) while Jayden Adams was named an NAIA Honorable Mention All-American.

Previously, Lang served as Assistant Baseball Coach at NCAA Division II Flagler College in St. Augustine, Fla., where he oversaw 24 Saints hitters. The native of Batavia, New York, fulfilled a two-year graduate assistantship at Eastern Nazarene College in Quincy, Mass., where he was also the Hitting Coach. His additional coaching experiences have included roles as Assistant Coach for the Traverse City Pit Spitters of Traverse City, Mich., (Northwoods League) in 2019 and as Head Coach of the Niagara Power Baseball team (NYBCL) in Niagara Falls, N.Y., in 2017-18. He led the Niagara Power to a playoff appearance.

The former Highlanders star earned his undergraduate degrees in Business Administration and Biblical Studies. He received his master’s in Management from Eastern Nazarene.

In spreading his love for the game of baseball, Lang has spent time as a Miracle League volunteer, which entailed playing baseball with adults and children with physical and mental disabilities. Lang also lived in the Dominican Republic for eight weeks, during which he taught baseball and provided meals to those in need. Caleb is the son of Kimberly and Michael Lang and he has five siblings: Ciara, Hannah, Abraham, Elizabeth and Levi. 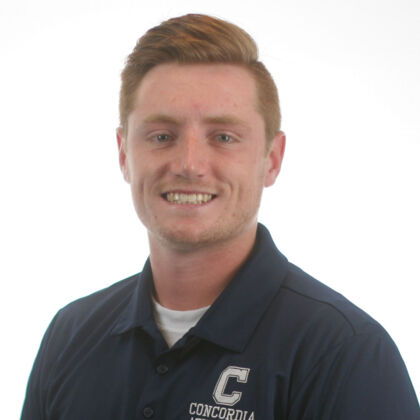 A former student-athlete for the Bulldogs, Tanner Wauhob returned to Concordia University as a graduate assistant coach beginning with the 2021-22 academic year. Wauhob helped the Bulldogs win the 2022 GPAC tournament title and to the finals of the NAIA National Championship Opening Round Bellevue Bracket.

Post-graduation, Wauhob spent a stint as a player and coach in baseball leagues in Australia and Croatia. He coached with the Redcliffe Padres (Australia) 13-16 year-old squad and the Baseball Klub Zagreb Seniors of Croatia.

The Sioux City, Iowa, native pitched at Concordia during the 2016 through 2019 seasons, helping the Bulldogs to two GPAC championships and two NAIA national tournament appearances. As a senior, Wauhob went 6-3 with a 4.27 ERA in 59 innings and was named Honorable Mention All-GPAC. He was also recognized as an NAIA Scholar-Athlete.

Wauhob earned his B.S. in Exercise Science from Concordia. He is currently pursuing his M.S. in Coaching and Exercise Sciences. Tanner is the son of Kevin and Karen Wauhob and brother of Aeriel. 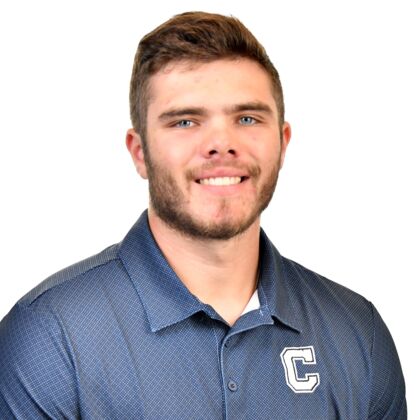 Will Iannacone joined the Concordia University Baseball staff beginning with the 2022-23 academic year. Iannacone arrived in Nebraska via his home state of Massachusetts.

As a collegiate athlete, Iannacone played one season of baseball at Southern Vermont College, two seasons at Mendocino College and two at Howard Payne University. He was named academic all-conference twice and academic all-state in 2020. Iannacone picked up his associates degree in Business Management from Mendocino.