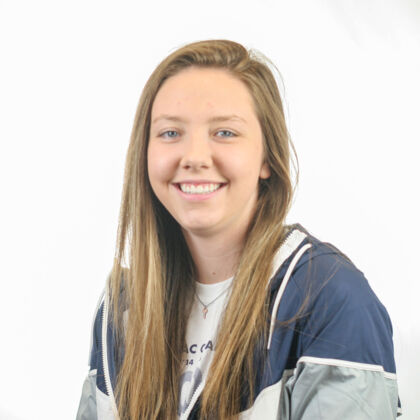 High School
Mackenzie played for Coach Rich Olson at Lincoln Lutheran High School and lettered all four years while being a starter for the Warriors. She was voted captain her senior year and holds the record for career 3s made. Awards include All-Conference Honorable Mention as a freshman, All-Conference 1st Team and All-State Honorable Mention her sophomore, junior and senior years. In addition to being awarded All-City Honorable Mention by the Lincoln Journal Star her senior year, she was chosen to play in both the Boys and Girls Clubs of the Midlands All-Star Basketball Game and the 2018 Nebraska Coaches Association All-Star Game. Mackenzie also lettered in track all four years at Lincoln Lutheran where she holds the school record for high jump at 5’5”. She was state champion in class C high jump her junior year and earned All-City Track and Field honors her junior and senior years.

Personal
Mackenzie was born in Lincoln, Nebraska, to William and Lori Koepke. She has a younger brother named Ben and enjoys traveling, spending time with family and friends, hiking, fishing and volunteering with youth sports.